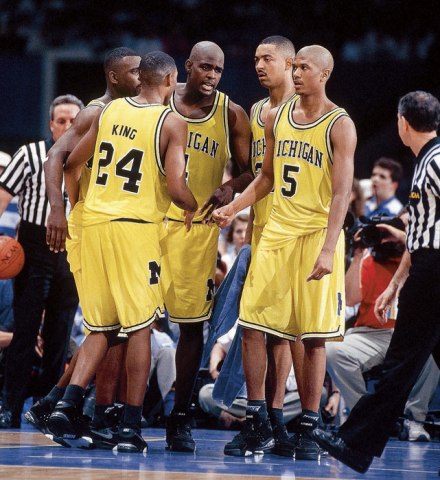 With the NCAA tournament only hours away from starting (oh who am I kidding? By the time you read this, it may be the 2nd round), I thought it’d be fitting to give a quick shout out to the Michigan Fab Five. They changed the game of college basketball, taking what the Runnin’ Rebels started and taking it to a whole other level as far as style, flair, and image.

Unlike UNLV, they never won a championship, losing in the title game back to back years. In fact, they never even won a Big Ten title (something Bill Walton used to always bring up back in the day).

Were they overhyped? Perhaps. Were they revolutionary? Absolutely. No team dared to wear  baggy shorts, and low cut blacks socks. No team encapsulated the times like they did, coming onto the scene right around the beginning of the ‘golden age of hip hop’.

I was in 7th grade when the Fab Five formed, having no idea that only 30 miles away from my Dallas suburb was an 18 yr-old named Jimmy King, who could jump out of the gym. In fact, I’d never even watched a full college basketball game up until the 1991-92 NCAA tournament. My dad rooted for teams like  UNLV, Arkansas and Georgetown,  because they had “more brothas” playing for them. The games were always on in the background, but the only sports I liked back then were football and baseball.

That all changed after watching my first Michigan basketball game. These guys were brash, fun, and high flying. Nothing gave me a bigger thrill than watching Chris Webber throw down an alley-oop dunk, and Jimmy King in the open court was an automatic two points. After watching them play the Bob Huggins coached Cincinnati Bearcats (led by Nick Van Exel) in the semi-finals, I spent the rest of the eveing practicing Jalen Rose’s lefty leaner in my buddy’s driveway.

I made some academic mistakes that forced my mother to ground me from television, and I was stuck listening to the championship game against Duke on the radio. The first half of the game went well for Michigan, but Duke dismantled them in the second half of the game. I listened in dissatisfaction while trying to imagine what Webber’s 360 dunk must have looked like on television.

We didn’t have cable at my house. This made every televised Michigan game an event, and I sat in front of the living room tv humming the “Hail to the Victors” fight song during the timeouts. One particular conference game between the Wolverines and Hoosiers was especially memorable because it got interrupted by local coverage of the Branch Davidian standoff in Waco.

I knew nothing about David Koresh, and had never been to Waco, and couldn’t care less at the time about any of it. The game was over by the time they cut back to the action. Indiana fans were cheering and the Wolverines were sulking on the sidelines as time expired.

The Fab Five run through the tournament was not a thing of beauty. They had trouble scoring at times because they weren’t a very good three point shooting team. Rob Pelinka (also known as NBA superagent to players like Kobe Bryant and James Harden) was their biggest outside threat off the bench. You could see how things opened up inside when he was in the game, as teams couldn’t sag off.

Their bench was also pretty young and thin; one that only went 8 deep at best. It goes to show just how good their starting five were because everyone (not named Ray Jackson) played over 1,000 minutes for the season.

I wonder now in hindsight if playing all five freshman (and sophomores) as starters was the best idea. Chemistry aside, I wonder just how more effective the second unit would have been had  King and Jackson led the helm.

Back then, small ball wasn’t really a thing outside of teams like FSU (with their 3 guard attack of Bobby Sura, Charlie Ward, and Sam Cassell) and sometimes Duke, but this era of Michigan ball sometimes looked unbalanced.

UCLA and Kentucky took the Wolverines to the limit before bowing out of the tournament, and a part of me wonders if they were spent by the end of that championship game against North Carolina. Mental fatigue can make people do funny things, and maybe that contributed to that ill fated timeout (causing me to lose my first ever sports bet).

There are plenty of games to watch online (courtesy of the NCAA vault), if you feel yourself geting nolstagic for the New Edition of 90’s basketball. They were not the most fundamentally sound of teams, and they rubbed a lot of old white people the wrong way, but they were still a lot of fun to watch.

You can’t look at the career paths of the Freshman Fab Five and say they were losers. Webber and Rose has gone on to have outstanding careers in the media, while Howard is an assistant coach for the Miami Heat. Ray Jackson runs an elite basketball program for Austin youth. Jimmy King is mentoring youth in Detroit.

King and Jackson didn’t do much professionally after Michigan, while Webber, Howard, and Rose played on various entertaining teams in the NBA (Howard of course got a couple of rings with the Heat).

You can bring up the off the court controversies that caused Michigan to vacate the wins, and you can always bring up the fact that Michigan never won any kind of championship. But as Jalen Rose himself says, “there is the scoreboard, and there is the score of the game of life.” I think you can say they all won in that regard–especially Rob Pelinka, that dude is filthy rich.