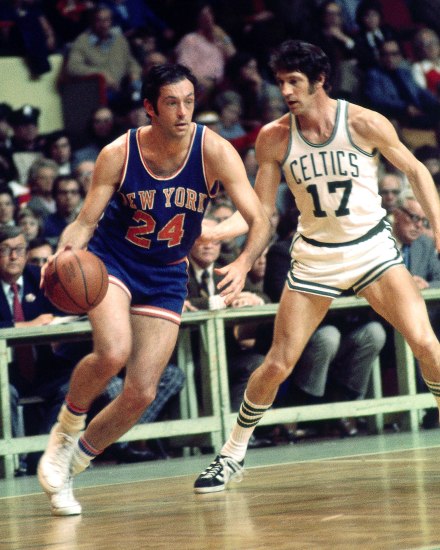 “The money and the championships are reasons I play, but what I’m addicted to are the nights like tonight when something special happens on the court. A back-door play that comes with perfect execution at a critical time charges the crowd, but I sense an immediate transporting enthusiasm and a feeling that everything is in perfect balance.”

“But there are a few games every year when I am neither personally competitive nor in pursuit of my team ideal. I simply play for the joy of the game shooting and passing without calculation. I forget the score and sometimes go through a quarter without looking at the scoreboard. I don’t think about my movements. I feel good running and bumping, and I get an overall sense of whether we are playing well, executing intelligently and precisely, by the crispness of the passes, the timing of the plays, and the enthusiasm with which we communicate. On those enjoyable nights fatigue is a stranger.”

Congratulations. If you are reading this post then that means you are alive (or dreaming that you’re alive and reading this).

Fuck February. Last month saw us lose Dr. Spock, former Blazer great, Jerome Kersey, and as of yesterday, Anthony Mason. My man Mason played shut down D, had sick handles for a man his size, and had a low key good jumper. His game posessed an ugly beauty; one that neophytes like me could appreciate. Mason wasn’t the best. Nor was his game the prettiest, but the man embraced what he had and made a career for himself.

To me, Mason embodied the whole 1990’s New York Knick ethos. You can say a lot about those teams. They were marginally talented, they were bullies, and their games were generally an eyesore (especially compared to today’s game), but those Knicks teams had heart. They got every ounce of production possible out each other, and went as a team with marginal offensive talent can go. Hell they almost won a championship. Big ups to #14.

Good ASS Games of the Week:

Monday is a “tap that vein” kind of night.

Phoenix vs. Miami is marginally entertaining, and New Orleans-Dallas has real playoff implications. Maybe even “Lil Brow Wow” will be ready to play again (So many injuries to so many superstars this year).

Houston-Atlanta just may be the “Good Ass Game of the Week” . Houston ain’t messing around. I almost want to say they are more entertaining without old Dwight manning the 5 position.

Catching Houston on a back-to-back may be the best thing for the “Grizzlebees”. Memphis hasn’t looked all that great post All-Star Break.

Portland-LA Clippers will be good. “Video Game” Dame (Big ups to Mikey!) had a yawner of a game the last time he faced off against Chris Paul. I’m sure he is chomping at the bit to get another shot at the “point God”

Oklahoma City-Chicago Does anyone really believe that D. Rose will be healthy enough to play in the playoffs? Not I says the Mick.

Dallas-Portland I remember a certain basketball blogger getting hella krunk about a certain team from Texas acquiring a certain guard from the University of Kentucky. Well, I stand by what I said–even if Rondo hasn’t played all that well. But Dallas fans may have to face the fact that 2012 Rondo may not be walking through that locker room door, and that’s okay.

Cancel your plans on Friday, or bring them along for the ride, because the two best Eastern Conference teams face off. Cleveland-Atlanta give us a little taste of what early May brings out of the east. I NEVER get excited about games played in the EST, but if you were to stop in any game in that time zone, this is the one to cancel a date for.

Dallas-Golden State will be good too–if the Mavs don’t get blown out that is.

Memphis-New Orleans will be an excellent “tap the vein” game, but I’d advise you to change whatever plans you made for Friday and move them to Saturday. Get your drink on, get your think on, or get your dance on. You have all of April to watch the Grizzlebees mangle the Pelicans.

Oklahoma City continues to be plagued by injuries, but they still keep fighting. Be afraid, be very afraid.

Clippers-Warriors on that matinee tip.

BUSTER(s) OF THE WEEK AWARD

Any coach in the Big 12 not named Bill Self. Old Self is cementing his rightful place in Springfield, Massachusetts with every consecutive conference title he grabs. If there were a year, that his streak were more vulnerable, I can’t recall off the top of my head. The Iowa State Hoibergs had a perfect opportunity to snatch at least a share of first place and lost consecutive games this week.

The poor Longhorn faithful down in Austin have a politician posing as a coach, as the Horns continue to underachieve. Whenever I watch KU-UT games I imagine Nick Collison and Kevin Durant sitting on a couch in front of a television. Durant is hype the whole time because it looks like UT will finally get the best of the Jayhawks, and the whole time Collison is confidently thinking, “Rick Barnes is going to find a way to lose this game to Bill Self.”

It matters not though, who wins this conference because the UK Cats are kings this year. I’m not even all that interested in the tournament this year. I’d rather Kentucky take on the best 6 teams and play them on a neutral court, on some heavyweight title (or video game bosses) shit. There will be no reason to watch the NCAA tournament at all, except to see who will get drafted where in the NBA. Which I guess is reason enough isn’t it?

Well congratulations on still being alive. Can’t take anything for granted in this day and age. I hope we can do this again next week.