[The following is an excerpt of a  chapter from my upcoming book, Tao of the Passing Big Man, and other essays. Due out if ,and when we survive this global pandemic.]

With only 8 miles separating the schools, it is only natural for a  rivalry to develop between Duke University (a private school) and University of North Carolina (a state school);especially as both basketball programs continued to develop in their competition for the state (and the nation’s) top basketball talent. Being in such close proximity only lends to more intrigue; much like two neighboring high schools. Teams hop on the bus to go play in the next town, and after the game, win or lose, they got to get on the bus to go back. Anyone who played high school athletics knows that feeling. Only a few miles separate Wake Forest, NC State, Duke, and North Carolina. This is what makes the Atlantic Coast Conference rivalry between the schools so special. For quite a while, to make the tournament from the ACC, a team had to win the tournament in order to qualify. This created a hostile four day environment for the conference tournament. NC State, Virginia, Wake Forest, and Clemson were tough opponents and things routinely got testy, but none of those games have the innate gravitas and star power as Duke and Carolina.

Some historians point to the year of 1961 as the tipping point of the rivalry, when an on the court fight–which turned into a brawl–between Art Heyman and Larry Brown. 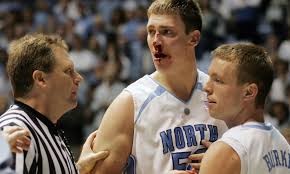 What followed from that game came a series of knockdown, bloody drag downs that defied the records of either team.

The rivalry leveled up a notch in the 1980’s when upstart coach Mike Krzyzewski took over the coaching duties for the Duke program. By 1984, Duke was regularly penciled in for the Final Four, and as college basketball rose to higher prominence and viewership, the rivalry got ratcheted up in intensity. Some games were better and more memorable than others, but outside of the Yankees-Red Sox in baseball, Miami-Florida State in football, you will not see a rivalry (with such national appeal) with such star power as Carolina v. Duke. For both programs, this is usually a measuring stick event to see where they rank vs. the rest of the field. In the past 27 seasons, either Duke or North Carolina have won the National Championship; accounting for 33.3 % of the National titles between the two programs.

Below are the top five games in no particular order

Future NBA bust Joseph Forte had 24 points and 16 assists to lead the Tar Heels to a win in Durham. Fans were robbed of an overtime game after Shane Battier inexplicably fouled Brendan Haywood going for a loose ball with 1.2 seconds left. Duke had just tied the game on a spectacular sequence that led to a Mike Dunleavy Jr. game-tying three with only 3 seconds left. Haywood (who had strangely enough had a chance to ice a game against Duke at Cameron Indoor 3 years earlier, but missed both free throws) connected on both attempts to win the game 85-83. Chris Duhon’s full court heave hit the back of the rim as time expired.

This is one of Duke’s worst teams (talent and record wise) in the Coach K era, but to be fair, Coach K was out that year due to back surgery. Although Langdon and Cherokee Parks both went on to have brief NBA careers, neither would make an impact on the next level. Despite the gap in talent, Duke made a game out of it, and somehow survived a barrage of legendary slam dunks by the Stackhouse and Wallace duo. Of course no Duke-UNC game is complete without some late game drama, and just when the Tarheels seemed to have things wrapped up, Jeff Capel hits a half court runner–at the buzzer– in the overtime period to send it to another overtime. Carolina would outscore Duke 7-5 in the additional OT period. Some consider this to be the greatest game in the rivalry, and having watched it live (and every other time it comes on television), I find it hard to disagree with this sentiment.

Despite the score, this was a competitive game until the very end. It was tied for at 61-61 before Carolina took control of things. Grant Hill showed why he was a can’t miss lottery pick ; showing no weakness in his game. Back then, he was easily the most talented player that Duke had produced thus far, and at the time was their version of Michael Jordan as far as producing complete players. Duke could not find an answer for Rasheed Wallace (in only his third start),  and eventually the Blue Devils got worn down by the big front line of the Tarheels. The game clinching run by the Tarheels was stamped by a high flying alley oop dunk by Sheed, followed by a back breaking 3 pointer by Donald Williams.

Frequently referred to as the “Chris Duhon” game. Duke would have four players from this team go into the NBA (Shelden WIlliams would make it big in his own way by marrying WNBA beauty Candace Parker). Raymond Felton ended up as the best NBA prospect on this Carolina team full of Blue Chip Recruits. This back and forth affair would be punctuated by a gorgeous reverse layup by Chris Duhon after a game tying Rashad McCants 3 pointer to tie the game up with 13 seconds left. Duke led most of the overtime period until the McCants’ bucket. His three was almost an exact play by play of when Carolina’s Jawad Williams hit a game tying 3 pointer off a pump fake to send the game into overtime. It was just another unbelievable frantic endgame in college basketball’s best rivalry.

This would go down as one of the most talented teams in UNC history, losing only 3 games total and going through the ACC regular season undefeated. Duke had a chance to escape Carmichael Auditorium with a win, but Matt Doherty’s jumper at the buzzer tied it up and sent it into overtime. By the second overtime, Duke was gassed and Carolina busted the game wide open. This did not diminish the excitement, as it would prove to be both Michael Jordan and Sam Perkins’ final games in Chapel Hill.

Historically, star power has always separated this rivalry from annual skirmishes of other college programs. Yet, for a number of years (probably starting around mid 2000’s) the star power just wasn’t there. When top pro prospects, R.J. Barrett and Zion Williamson stepped onto the Durham campus in 2018, the buzz level was akin to the old 90’s classic games which featured players who were not only stars, but school legends. Both schools still get NBA talent, but the way college ball operates these days, fans don’t get to see the best players develop from year to year; eventually seeing their talent and maturity coalesce into strong senior seasons.

This never stopped the games from being competitive or exciting, however; up until the 2019-2020 season, the two teams had split the last 100 games 50-50; with each team scoring 7,746 points each. The first meeting of the 2019 season between these two resulted in a buzzer beater game winner for Duke that would make honorable mention if there weren’t at least 50 other games that were just as good;if not better. It was a good one too. Duke won 98-96 at the Dean Dome in overtime, and hit two buzzer beaters–one to send it to overtime, and the next one to take the game. There were some nice players–some will even make the NBA of course–unfortunately there were no monsters on either school’s roster, but it still had the DNA of a good ass game–which is almost always a guarantee when Duke plays Carolina.