It was good to be back in the home state, getting my hoop fix with the homies.

I had the pleasure of going to see the Timberwolves with a couple of friends from Austin. We drove down to San Antonio and ate at this downtown spot, Josephine Street.  It had everything you would want in a restaurant: good food, cool atmosphere, an attractive waitstaff, and a Spurs superbus for patrons who don’t want to drive to the game (and yes they do in fact, chant “Go Spurs Go!”).

It is a great deal for people not wanting to deal with the parking headache at AT&T, or for those who wanna get trashed on $10.00 beers.

Although a bit out of the way from everything else in San Antonio, the arena itself is a state of the art facility. There isn’t a bad seat in the house, and everything inside serves its function. 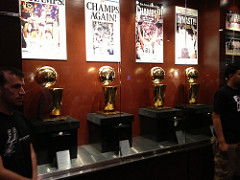 For a ho hum “tap that vein” kind of Monday, with no Tim Duncan, the evening was very entertaining.

For starters, the National Anthem was sung by a man and woman duo of Arab descent, wearing their full garb and Keffiyeh. I thought it was a really beautiful gesture by the Spurs organization to fly in the face of the disturbing anti-Islam stances going on in this country.

We had to eject some University of Oregon football players from our seats, who then continued to seat hop for the duration of the 1st quarter, before finally settling into the nose bleed “comp” seats they were given for playing in the Alamo Bowl.

Speaking of ejections, Popovich, got ejected in the 2nd quarter. We didn’t figure out why until later. He was pretty irate. I’m not sure why, but for some reason the league is not calling defensive 3 seconds. It doesn’t seem like such a stretch for someone like “Pops”, a man who doesn’t care much for the 3 pointer, to lose his shit over a ref blatantly ignoring a rule.

The second half provided some much needed theatre with the highlight of the game being a run led by Boban Marjanovic. The crowd went nuts as he took over down in the post. Every rebound and basket by him, led to an eruption of cheers from the crowd. It started to actually feel like a Spurs game.

1) the Spurs are stacked. This is the deepest Spurs squad that I can remember–especially in the front court with David West, Boris Diaw, Kyle Anderson, and Boban. Their backcourt is pretty nasty too. I’m convinced that Patty Mills and Jonathan Simmons could start for half the teams in the NBA. You put these two on the Bucks and they are suddenly in the playoff hunt again.

2)The Silver Dancers are the best basketball dancers in the league. The only set of NBA dancers that give them a run for their money are of course the Hornets’ own squad. Normally the in game timeouts are a chance to crack jokes and make small talk, but our row was quiet. I silently watched this dazzling display of curvy bodies weaving in and out of synchronized lines, and had no qualms about showing my pleasure for what I witnessed. #standingovation

3) I’m not a fan of Zach Lavine. We watched this guy shoot six straight crunch time jump shots (four of them missing badly). He never tried to pass once during winning time. He chucked it up soon as he got the ball. He plays like a really poor man’s Russell Westbrook, you know, if Westbrook played like a buster. I’ve got no problem with volume scorers at the point guard position, but if you have Karl Anthony Towns, and Andrew Wiggins, maybe it would be a good idea to get them some touches.

I don’t care if the east is winning more games than the west. I hate watching teams from the east play ball.

No Durant tonight, but Rondo vs. Westbrook sounds good to me.

This is another one with “Good Ass Game” potential. with two pretty decent backcourts going at it.

Man. Its not quite as fluid without Steph in there is it?

Another good one. Spurs will probably blow them out, but it’ll still be worth watching.

I know I made the NCAA/”Skinemax” analogy a few weeks ago, but its #1 vs. #2, in Allen Fieldhouse on a Monday night. I think it’ll be hype.

KP got the “Rookie of the Month” in the Eastern Conference. Big ups to that guy. This will be worth a peep though.

This could be a more even matchup if Durant isn’t back yet from his sprained toe.

Gonna be a scrappy affair.

Remember that triple OT game back in the day????

I have been wanting to go watch a Mavericks game all year, and had January 2nd circled on my calendar. Unfortunately the Pelicans have been garbage, so I wasn’t feeling it (in fact they won’t make a Good Ass Game feature until they get my boy “Brow Wow” some help). It turns out the Mavericks played weakkkkkkkkkkkkkk. Only thing worse than the actual playing was the officiating.

Maybe not the “Good Ass Game of the Week”, but I’m excited at the prospect of a Boban vs. Kristaps Porzingis stand off  in the paint for a possession or two.

I’m not sure if Steph will be back, but the potential backcourt matchup has me salivating. By the way, C is for C.J.

I agree with Rick Fox when he says, “The Clippers are winning again, but they aren’t scaring anybody.”

This will be competitive and a fun game.

I hope the Bucks players can behave themselves in the city that never sleeps. Speaking of strip clubs, if someone were to ask me what location would be provide the best chance for an NBA player and his girlfriend to get robbed while leaving in their Uber, I would have responded with Queens. Frankly, I had no idea there were strip clubs in Queens. I would think they only existed as drug fronts. While I’m at it, big ups to his chick for being a “Ride or Die” kind of gal. Any gal who would accompany their boyfriend to a strip club in Queens, New York, definitely deserves to be the main chick (Iceberg Slim coined a different term for this kind of loyalty in a woman).

Westbrook vs. the Trailblazers backcourt is going to be fun to watch.

Be on the lookout for the newest episode of the Full Sass Podcast We got a chance to get some recording while I was in Texas, it was so much fun that I can’t wait until the next session. Enjoy the games this week, and stay away from sketchy night clubs.