I did not realize how late  I was to the work of the FreeDarko crew until recently, when I saw a tweet lamenting the fifth anniversary of the site’s final post. My NBA hoops fandom shut down in the early 2000’s when I was convinced the game was rigged. The Kobe-Shaq era Lakers were laying waste to the rest of the NBA, and it felt like the refs were helping.

2003 was a great year for basketball. The NCAA gave us one of the best tournaments in its history, and the Spurs finally knocked off Los Angeles and gave me one of the most satisfying visuals of all time–Kobe’s tears.

2003 also gave us what is arguably the second best draft of all time. It is a draft full of really solid role players, and four of the biggest impact players of this era in Lebron James, Dwayne Wade, Chris Bosh, and Carmelo Anthony. Darko Milicic was a player not in either group. Homie was a bust at the number 2 pick (ahead of Anthony, Bosh, and Wade), and Joe Dumars insistence on picking Darko was the difference between them being a pretty dominant Eastern Conference team, and a mid-aughts’ dynasty.

But not all was lost, a collective of like-minded hoops heads got together and created a forum that continues to influence the way that basketball is discussed on the internet within blogs, articles, and even twitter. There are a Who’s Who of current sports journalists spawned from this generation of writers. You may know them from ESPN (Ethan Sherwood Strauss), Grantland (Rafe Bartholomew, Chris Ryan, Brian Phillips) D Magazine (Zac Crain),  Vice (Eric Nusbaum), and even Deadspin (Will Leitch).

In a way, Bethlehem Shoals and company may have provided a blueprint for DIY thinkers, writers, and junior analysts to get their voices heard, and at the same time be taken seriously. What started as a fringe project became a phenomenon, and this book was one of the results of their work.

I discovered The Macrophenomenal Pro Basketball Almanac when I was living in Oregon. A good friend of mine had it on his bookshelf, and I pored through it for the next hour and a half of that evening. It was unlike anything I’d come across, and the illustrations by Jacob Weinstein were enough to give pause. 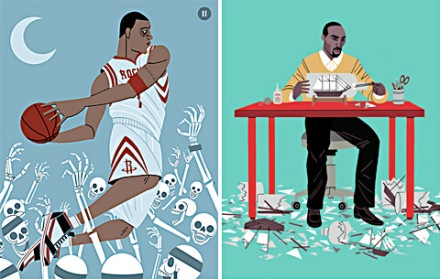 The foreword is written by Gilbert Arenas; a man who lives in NBA infamy for a number of things, including the penchant  for yelling “Hibachi!” after taking shots when he suspected he was heating up. 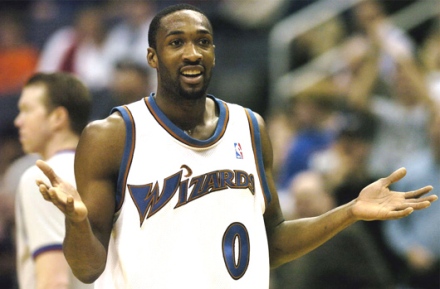 The book begins with a “FreeDarko Manifesto”, and a “Periodic Table of Style” to help readers with the descriptive icons for player ratings. There are six chapters, divided into Master Builders, Uncanny Peacocks, Lost Souls, Phenomenal Tumors, People’s Champs, Destiny’s Kids. At the end of each chapter is a special sub section that highlights different topics using charts, illustrations, and diagrams.

Published in 2008, the books reads almost as a dated reference. The majority of the featured players are long past their peak. Players like Tracy McGrady, Vince Carter, Ron Artest (Metta World Peace) Rasheed Wallace, Tim Duncan, Kobe Bryant, and Tim Duncan have retired, while players like Lebron James, Chris Paul, and Amare Stoudemire are seasoned veterans.

It is extremely interesting to read and examine the ratings, and bios of these players, and analyze where their career went afterwards. I often wondered if the FD boys would want a Mulligan on any predictions that may have seemed reasonable back then (in particularly Josh Smith and Gerald Wallace).

The smart and witty design provides a primer for some of the heady and lofty ideas spouted in the text. This period of basketball rides the first wave of the analytics movement, ushering in new ways to consider talking about and watching the game. Funny, at times sober, and always thought-provoking, the Macrophenomenal Pro Basketball Almanac is a must own for lovers of NBA basketball.