Random thoughts from watching this game:

Don’t let the final score fool you. This was a good ass game and very entertaining with lots of good runs. Its worth the sit down. Trust me.

The following is a chapter from my upcoming book, Tao of the Passing Big Man, and other essays. Due out if and when we survive this global pandemic.

The NBA draft is a fascinating social phenomenon. Front offices use it as an opportunity to pitch entice their team’s fan base to renew their season ticket packages (sometimes before the season is even over). Some fans use it as a beacon of hope for their favorite team and some players see the draft as a harbinger of what is to come for their own careers.

A great draft can create a dynasty, a good one can extend it, and a bad draft can set a franchise back five to ten years. The line between bust and boom depends on two important factors: the health of a player and the health of a franchise. Would Steph Curry and Kawhi Leonard be the same kinds of players had they landed in Brooklyn or Indiana? Would we think of Michael Jordan and Kevin Durant the same had their careers started in Portland?

Sometimes it really is just a matter of a player landing in the right situation. Successful organizations invest in their draft picks and put them in situations to succeed. Not all superstars come into the league ready made; some need to be developed and coached and polished into the diamonds they eventually become.

Unfortunately, this isn’t always the case. Veterans carry value within the locker room as well as on the court. As is in life, sometimes its all about meeting the right people to help steer you in the right direction. But NBA success isn’t guaranteed. For every Kobe Bryant and Jimmy Butler, there are tons of players who eat themselves out of the league, have substance abuse problems, and even cases of mental illness. The NBA draft is a crapshoot, and some organizations were good, some bad, and others were just plain (un) lucky.

In this chapter we examine a few select draft classes–ones which altered the league indefinitely–that were springboards to some franchises success and doomed others to being league doormats. These drafts were full of generational talent that changed the league for years to come. Some teams set themselves up to contend for the decade, while other teams set themselves up for failure. You can take a look and see from the drafts which teams trended where.

Bust (top 5 draft pick who never became an All Star)

Steal of the Draft: Lebron James. Again, it is difficult to call a number one pick a steal in any draft, but if you consider the effect this pick had on the city and the franchise (and consider the number of lottery picks that would not work out for Cleveland over the next decade and a half), then you understand why I chose Lebron for steal of the draft. Lebron brought Cleveland its first championship in half a century and made the Cavaliers (and the city of Cleveland) relevant in the sports world. James will get a statue out in front of Cleveland’s basketball arena and will go down as one of the top 10 players to ever lace them up.

In 2011,  the Heat signed free agents, Lebron James and Chris Bosh to play alongisde Dwayne Wade in their primes. This was effectively having the #1, 3, and 5 draft picks from that draft. They went on to win–not one, but–two NBA titles in a run of four straight NBA Finals.

This is officially the final season preview in the final season of This A Good Ass Game. Our philosophy at Full Sass of course, if its to be done at any sass level, then it must be done to its fullest, and unfortunately I don’t have the time (or the manpower) to keep this site going. I did however, find it crucial to give it one last go just for old time’s sake. So for the final time, I bring you this season’s most compelling NBA story lines, A-Z for the 2018-2019 season–the abbreviated version.

Are the Golden State Warriors going join the short list of dynasty and get that 3-peat?Whether or not they hoist that trophy up again depends on their role players and how healthy they are heading into the playoffs.

Boston’s Depth. They go ten deep this year. Eastern Conference is theirs for the taking. I’d be shocked if they didn’t make the NBA Finals.

Competitive Balance or nah? Lebron and Kawhi moving eastward opens up a vacuum in the Eastern Conference. Who wants it?

Denver finally will get into the playoffs. But everyone will be too stoned to care.

End of an Era. Only two active players left who were drafted in the 90’s. Dirk Nowitzki and Vince Carter.

Folks were sleeping on the Spurs, and maybe they were right to be. Who knew their backcourt would get ravaged with injuries before the season even began?

Grizzlies got their fangs back? On paper they got some good players, but what happens if Mike Conley and Marc Gasol get hurt again? And they are still paying Chandler Parsons just to practice.

Houston regresses, but only slightly (of course this changes if they somehow trade for Jimmy Butler). They got slower, and older,but at least they got rid of Ryan Anderson’s contract.

Indiana won’t be sneaking up on anyone this year.

Kawhi’s new home or just a jump off?

Lebron’s new locker room. Lavar Ball, Javale McGee, Rajon Rondo, Michael Beasley, and Lance Stephenson all in the same locker room? I’m all in on this.

Mavericks finally entertaining again (and I’m not talking about the off the court lawsuits). Luka Donkic might be this generation’s Andre Miller (and believe me that is not meant as a diss).

New Orleans is about to feel the heat. Anthony Davis signing with Klutch sports? He is good ass gone.

Opportunity knocks for Mike Budenholzer in Milwaukee. Bucks made a great pick with Mike B. for their head coach. And yes I still think Jason Kidd can still be a good head coach somewhere.

Playing time for Nerlens Noel. I hope he can parlay this into a big contract. Don’t mess this up Nerlens.

Quiet Loans Arena…………..crickets…crickets………Kevin Love is about to experience some Deja Vu as his career is going to bookend with a bunch of L’s and empty stats.

Rookie of the Year goes to……… of Deandre Ayton, Luka Donkey-Kong, Marvin Bagley, and Jaren Jackson, Jackson is the only one with a legit shot to see playing time in April. My dark horse money is on the son of a former Spur.

Sixers will disappoint this season. Their bench is thin and are you really sure that Fultz, Simmons, or Embiid can stay healthy the entire year all at the same time? Yea me neither.

Thibs’ is f*$kin’ up! NBA front offices, do yourselves a favor: No more dual roles for head coaches. It just doesn’t work.

Utah is worth hating on again. Greyson Allen and Quin Snyder are both Dukies. Rudy Gobert is French, and Joe Ingles looks like some average schlub at the 24 hour fitness court. I do mess with Donovan “Spidey” Mitchell though. That dude goes hard.

Vince Carter can still contribute to a playoff contender. Philly, or Miami should trade for him if they can swing it.

Will this finally be the year the Trailblazers fans revolt?  Paul Allen died today so I don’t want to speak ill of the dead……..BUT Portland fans have been so happy just to have a team that they have no standards. As long as Blazers fans are simply  satisfied just o make the playoffs and get knocked out in the second round, then ownership will never have an incentive to field a championship roster.

X-ray results of my ankles. Am I ever going to be able to play full court basketball again? Tune in next week on the next episode of Kaiser’s Crusades.

Youthful Injection. Kevin Durant was in the 2007 draft and is considered a vet. Only four active players are left from the legendary draft of 2003. The NBA has gotten younger and there is a whole wave of young studs ready to fill that vacuum after this Warriors and Celtics championship wave is finished. [Eye’s Wide Open Emoji]

Zhaire Smith’s bad luck. I had high hopes for the swingman out of Texas Tech. I desperately wanted him to fall to the Spurs. Philadelphia drafted him, and he’s gotten all kinds of bad luck and freak injuries since. Poor guy. Get better soon Zhaire. Best of luck!

Rookie Of The Year: Jaren Jackson

Just a few thoughts on this week’s past games as the Final Four shapes up to what looks like some exciting basketball. 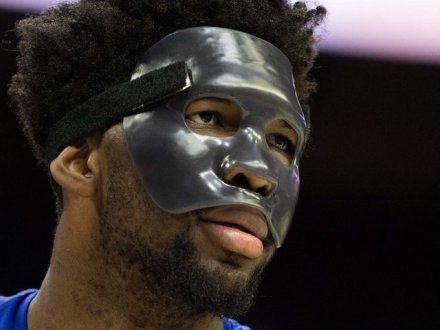 Toronto vs. Washington (Toronto in Seven)

Boston vs Milwaukee  (Boston in Six)

Cleveland vs Indiana  (Cleveland in Six)

Houston vs. Minnesota  (Houston in Seven)