As of today, there are still four teams battling to advance to the second round of the eastern conference playoffs. Over in the west, I’ve got Golden State beating New Orleans in six games, and Houston beating Utah in seven games next round.

Cavs in five over the Rappers, and Philadelphia in six over Boston.

The more hoop I watch, the clearer it becomes to me how wack the other major sports are. This week really drove that point home. The National Football League’s on the field product is too goddamned boring to justify all the off-the-field bullshit that is going on. It’s like W-W-fucking E with all the drama outside of the white lines. It has gotten so bad that corny ass sports columnists have become major football stories.

Now with the new rules, they may as well put skirts on the quarterbacks and call it powder puff football. Look at this. This is now an illegal hit. I have no interest at all in watching flag football when I could be playing it. No thank you. “You can keep that. Don’t holla at me no more I’ll holla at you.” I liked it better when the NFL didn’t pretend it wasn’t a gladiator sport.

I love playing and coaching baseball, but let’s face it, that shit can be so boring to watch. Baseball is wack for the fact that in the American League a dude can rake in millions of dollars just to bat four times, not play the field, and sit in the dugout and spit sunflower seeds on the ground.

I know that in the NBA the Eastern Conference is the JV to the Western Conference varsity games, but that just means I can direct my focus on only 8 or 9 or 10 teams (and sometimes Chicago). This has been a week of good ass games, starting with
the Milwaukee-Phoenix nail biter, and ending with the Spurs-Mavs.
Tonight’s San Antonio-Dallas game was worth watching even without the Spurs’ top four players playing. I got to finally get a good look at Kyle Anderson, the Spurs first round draft pick (he looked good at times, made some rookie mistakes but I like that he is getting some minutes this early into the season). I also got to watch the Mavericks usher in the Rajon Rondo earlier.

I’m happy for Rondo for a couple of reasons: #1. He is out of the dreaded Eastern Conference. #2. He is finally free of the negativity that is associated with Boston sports. it is no picnic for anyone who plays there, but black athletes dating back to Bill Russell can attest to the difficulties of playing in the city of Boston. Texas is a warmer state (socially and climatically) with lower taxes and he’ll be appreciated in Dallas–playing for one of the best owners in sports.

Rondo is like one of your friends who has been seeing someone that everyone knew was getting a little “strange” on the side. The Celtics have been sneaking around behind Rondo’s back, calling other folks on the phone, sending secret texts and denying that they were looking around for something better.

How is a dude suppose to relax with all that going on? People have been saying for years that Rondo is an island, but maybe he was put on an island by the Celtics a long time ago. Ever since they traded Perkins to the Celtics, there has been an obvious disconnect between the words of Celtics’ front office and their action.

I’m happy for Rondo. He has a talented core of guys to run with, and a genius head coach to put him in a position to succeed. Fuck Boston.

Rondo looked a little in shock but still played well enough to help the Mavs win. He had a couple of nice dimes and a decent game overall with 6 points, 9 assists and 7 rebounds (6 of them in the first half). Monta Ellis went full throttle during the end game of the 4th quarter and got 38 points. Even without Duncan, Ginoboli, Parker, and Kawhi Leonard, it managed still a “Good Ass Game.”

I’m sure some of you are thinking, “Bobby Mickey, does this mean you’re a Mavericks fan now?” Hell no. But it doesn’t mean I can’t dig watching them. Rondo has always been in my opinion underrated, and I think he will finally be in an environment where he can thrive. Anywhere there is a pass first point guard who can rebound and play defense like Rondo, you best believe I’ll be tuning in.

For the rest of their season they have become the “Must Watch Mavs.” If they can fortify their subs on the front line, they will be as good as any of the other top flight teams in that conference (you could talk me into Memphis, San Antonio, Golden State, Clippers, or OKC depending on what day it is).

Good Ass Games of the Week

Somehow I missed that the Grizzlies were playing in Cleveland tomorrow. Well if you are reading this right now while your date is passed out, or in the bathroom taking off their makeup, then don’t let brunch last TOO long. Drop them off in time to at least watch the second half of the game.I’m sure it’ll be worth it. The GrizzleBees should mangle them.

Portland-Houston In all the Rondo to Dallas excitement, people have slept on Houston’s trade for Corey Brewer. Brewer can defend the perimeter, and is a very good role player who has 3 NCAA rings and an NBA title. Say what you will about Houston, but you can’t call them busters this year. Portland is rolling right now, with everyone playing really well together. “Dark Nowitzki” (big ups Sam) and “Late Game Dame” willed the Blazers to a big win Friday night against the undermanned Spurs (a combined 75 points out of the 129 they scored that night). They are ready to go deep in the playoffs. They remind me of the 2011 OKC squad that made it to the Western Conference for their first time as a franchise. They have that look about them. 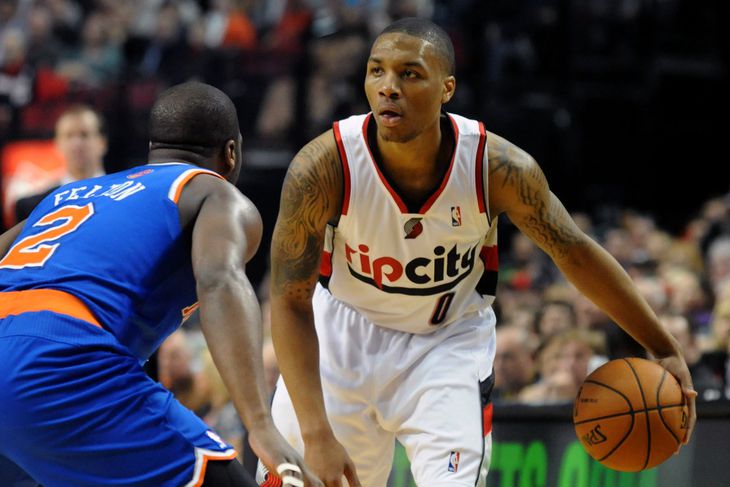 Speaking of the undermanned Spurs, they are pretty banged up right now. This could be a very short playoff run for them without Kawhi Leonard. He is the difference between getting to the Finals and getting knocked out in a fiercely contested first round. They have played and lost 3 “Good Ass Games” (2 of them unbelievably good triple overtime affairs) this week.

It doesn’t get any easier for them against the Clippers on Monday, who are looking scary good. J.J. Redick has finally figured out what will keep him in the league and he is doing that well. I knew that he wouldn’t be able to tear up the NBA like he did the ACC, but its good to see he has found himself a good situation. That pick n roll with Chris Paul is so much nastier with guys who can spot up, and they make defenses pay for over committing to the rolling big men.

“Tap the vein” Monday continues with Golden State-Sacramento. The first half of the Golden State-OKC game was the best half of basketball I’d seen all season–up until KD hurt his ankle (Durant had scored 30 points in 18 minutes, missing only 2 shots). The second half atmosphere was deflated a little when it became clear that Durant wouldn’t be back out, but by the fourth quarter it had already wrapped up “Good Ass Game of the Week.” Danny Green hit some big shots this week to make it a little closer than it should have been. I could watch and re-watch the first half of that game over and over again. MMMPPPHH!

Portland vs. OKC
Dallas vs. Phoenix
Golden State vs. Los Angeles Lakers
And they do run run run, they do run run. Look out! The Thunder have played themselves back int the playoff hunt and its no longer a matter if, but of where they will be seeded. Sacramento’s season is over. Unless Phoenix (who have been losing too many close games–you gotta beat those Eastern Conference teams–those are gimmes) and New Orleans make trades, they can call it a wrap. It will probably be the same playoff teams as last year as one super famous former Michigan alum correctly predicted.

Wednesday
Christmas Eve. Get ya money!

This two games are the only Christmas presents I need. The only thing that would make these match ups better would a healthy Andrew Bogut for the evening showcase–my pick to click for “Good ass Game of the Week”

Houston-Memphis
There may be some pushing and shoving in what will no doubt be a physical game. Besides that, Friday may be a good time to capitalize on that holiday cheer and see who came into town for the holidays. Regardless whether you are giving, or receiving, make sure you wrap up any gifts that may come down the pipeline that weekend.

Saturday
Trust me. Tonight is the night to get out and do something. You don’t want to be home watching the Pelicans-Bulls on a Saturday night do you? If you must watch it, at least go out to a bar, have a few drinks and talk to to people.

I can’t think of a better way to begin the week can you? Happy holidays and winter solstice. We are only a couple of weeks away from 2015. It’s time to chill, reflect, and project for the next year. As crazy as the world is, there is a lot to look forward to. If we have our health and our family,our hoops and our friends, then we have a lot. Everything else is gravy.